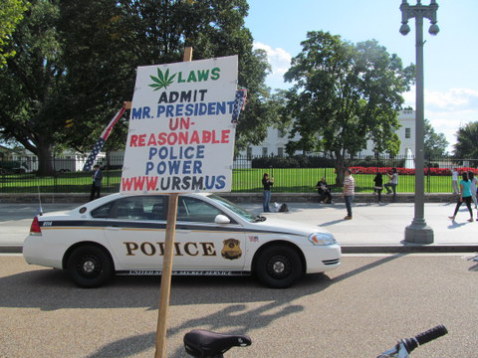 The issue is about compelling reasons for the law not the operation of the law.

NORML, the Nationl Organization Reform Marijuana Laws, believes The Fourth Amendment and the Fifth Amendment "provide the foundation for the rights that protect all U.S. Citizens from intrusive law enforcement practices.”

This definition of Amendments IV and V demeans the purpose of these Amendments to secure persons from unreasonable and unnecessary laws that authorize the use of government police power that depives persons of their liberty and property.

The states possess….. the power-to prescribe such regulations as may be reasonable, necessary, and appropriate for the protection of the public health and comfort; and that no person has an absolute right 'to be at all times and in all circumstances wholly freed from restraint;' but 'persons and property are subject to all kinds of restraints and burdens…taking care always that no regulation, although adopted for those ends, shall violate rights secured by the fundamental law, nor interfere with the enjoyment of individual rights beyond the necessities of the case. California Reduction Company v. Sanitary Reduction Works of San Francisco, 199 U.S. 306, 318 (1905)

“The Legislature, …, shall have full power to make and establish all reasonable laws and regulations … not repugnant to this Constitution, nor to that of the United States.” http://www.maine.gov/legis/const/

Amendment IV "The right of the people to be secure in their persons, houses, papers, and effects against unreasonable searches and seizures shall not be violated" Fourth Amendment

But it is equally true that in every well-ordered society charged with the duty of conserving the safety of its members the rights of the individual in respect of his liberty may at times, under the pressure of great dangers, be subjected to such restraint, to be enforced by reasonable regulations, as the safety of the general public may demand. Jacobson v. Massachusetts, 197 U.S. 11, 27 (1905).

“The validity of regulatory “measures are challenged on the ground that they transgress the Constitution, and thereupon it becomes the duty of the court, in the light of the facts in the case, to determine whether the regulation is reasonable and valid or essentially unreasonable, arbitrary and void.” Norfolk & W.R. Co. v Public Service Commission of West Virginia 265 U.S. 70, 74 (1924).

“‘[A] governmental purpose to control or prevent activities constitutionally subject to state regulation may not be achieved by means which sweep unnecessarily broadly and thereby invade the area of protected freedoms.’” Griswold v. Connecticut, 381 U.S. 479, 485 (1965); NAACP v. Alabama, 377 U.S. 288, 307 (1964)

“Legislative authority to abridge [plaintiff’s liberty and] property rights … can be justified only by exceptional circumstances and, even then, by reasonable regulation only, and that legislative conclusions based on findings of fact are subject to judicial review.” Nebbia v. New York, 291 U.S. 502, 543; 54 S.Ct. 505, (1934).

It is the governmental power of self-protection and permits reasonable regulation of rights and property in particulars essential to the preservation of the community from injury. Panhandle Eastern Pipeline Co. v. Highway Comm'n, 294 U.S. 613, 622 (1935).

'The possession and enjoyment of all rights are subject to such reasonable conditions as may be deemed by the governing authority of the country essential to the safety, health, peace, good order, and morals of the community. Even liberty itself, the greatest of all rights, is not unrestricted license to act according to one's own will. It is only freedom from restraint under conditions essential to the equal enjoyment of the same right by others. It is, then, liberty regulated by law.' Jacobson v. Massachusetts, 197 U.S. 11, 26 -27 (1905) > [137 U.S. 86, 89, 90 (1890) ]

it was held that the legislature had power, under the constitution, to establish reasonable police regulations ……police regulations adopted to aid in the protection of life and health was properly one of legislative determination, and that a court should not lightly interfere with such determination, unless the legislature had manifestly transcended its province. [169 U.S. 366, 393]

Necessary and Proper clause
Constitution of the United States Article I Section 8 paragraph 18: “To make all laws which shall be necessary and proper for carrying into execution the foregoing powers, ….”

it does authorize the establishment of laws requiring each citizen to so conduct himself, and so use his own property, as not unnecessarily to injure another. Munn v. Illinois, 94 U.S. 113, 124 (1876)

The legislature may not arbitrarily interfere with unusual and unnecessary restrictions. Police powers is not final or conclusive, but is subject to the supervision of the courts. Lawton v. Steele, 152 U.S. 133, 138 (1894)

Such a law, even though enacted pursuant to a valid state interest, bears a heavy burden of justification, …..and will be upheld only if it is necessary, and not merely rationally related, to the accomplishment of a permissible state policy. McLaughlin v. Florida, 379 U.S. 184, 196, (1964).

This is the very essence of government, and [94 U.S. 113, 125] has found expression in the maxim sic utere tuo ut alienum non laedas. From this source come the police powers, which, as was said by Mr. Chief Justice Taney in the License Cases, 5 How. 583, are nothing more or less than the powers of government inherent in every sovereignty, . . . that is to say, . . . the power to govern men and things. Under these powers, the government regulates the conduct of its citizens one towards another, and the manner in which each shall use his own property, when such regulation becomes necessary for the public good. Munn v. Illinois, 94 U.S. 113, 125 (1876)

The Constitution does not secure to any one liberty to conduct his business in such fashion as to inflict injury upon the public at large, or upon any substantial group of the people. …. any other form of regulation, is unconstitutional only if arbitrary, discriminatory, or demonstrably irrelevant to the policy the Legislature is free to adopt, and hence an unnecessary and unwarranted interference with individual liberty. Nebbia v. New York, 291 U.S. 502, 538-39 (1934).

In his Commentaries, after speaking of the protection afforded by the Constitution to private property, Chancellor Kent says: But though property be thus protected, it is still to be understood that the lawgiver has the right to prescribe the mode and manner of using it, so far as may be necessary to prevent the abuse of the right, to the injury or annoyance of others, or of the public.

To justify the state in thus interposing its authority in behalf of the public, it must appear-First, that the interests of the public generally, as distinguished from those of a particular class, require such interference; and, second, that the means are reasonably necessary for the accomplishment of the purpose, and not unduly oppressive upon individuals. Lawton v. Steele, 152 U.S. 133, 138 (1894)