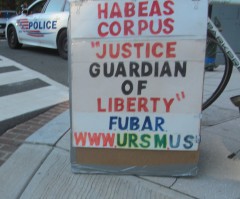 East side of U.S. Supreme Court.

JUSTICE THE GUARDIAN OF LIBERTY

"Fouled Up Beyond Any Recognition"
(FUBAR)

"All, too, will bear in mind this sacred principle, that though the will of the majority is in all cases to prevail, that will to be rightful must be reasonable; that the minority possess their equal rights, which equal law must protect, and to violate would be oppression. "Thomas Jefferson, First Inaugural Address In  Washington, D.C. Wednesday, March 4, 1801

Legislative authority to abridge [plaintiff’s liberty and] property rights … can be justified only by exceptional circumstances and, even then, by reasonable regulation only, and that legislative conclusions based on findings of fact are subject to judicial review.” Nebbia v. New York, 291 U.S. 502, 543; 54 S.Ct. 505, (1934).

Citizens of the United States  believe the DRUG WAR is a political question. What is a crime is not a fundamental right. Proscribing marijuana as a federal controlled dangerous substance is rational, POLITICAL  police power regulation.

By planned ignorance, the legal system has manipulated the judiciary  to declare marijuana is not a fundamental right. You do not have a liberty interest to smoke marijuana, thus ignoring the operation and effect of police power deprivation of liberty. Liberty has lost its true meaning, freedom from unreasonable physical restraint by police power. We are subjected to rational, political police power. The police have controlled public opinion where the majority rules. Drug users are treated as non-persons and denied equal proctection of due process of law by the legal system.

In a court of law every defendant in the prosecution of the drug war have had and still have  standing presenting a justiciable controversy, to question the reasonableness, the constitutionality of the law that used police power to deprive them of their liberty and property their right to be secure in their persons, houses, papers and effects against unreasonable searches and seizure shall not be violated.

The press has never held accountable the lawyers of the judiciary for declaring criminal laws are a political question.

It is a lie for the legal system to declare marijuana laws use of police power are a political question and not a fundamental rights issue. It is a lie to declare the drug war complies with the rule of law when there is no victim of a crime.

MUST READ to understand. Impeach Chief Justice Saufley Maine Supreme Judicial Court;  My opposition to her renomination by Gov. LaPage 2016. I believe her decision in 1998 ME 92  is why she became Chief Justice, Rational police power.

The Maine Courts have declared marijuana laws are rational use of police power, a political question violating the 4th Amendment.

Federal and state courts have consisitently ignored my claim the enforcement of the marijuana laws implicates the deprivation of privacy, liberty, and property secured against unreasonable government intrusion by the 4th [5th] and 14th Amendments..

In all my lawsuits I have never ask the courts to declare marijuana a fundamental right.I have never claimed penalties are arbitrary.

It is not about the federal classification of marijuana as a controlled substance. It is about criminalizing marijuana and the operation and effect of police power that seizes your person and marijuana and deprives your fundamental rights to liberty and property, without reason,without a compelling state interest, without due process of law. There was no victim of a crime. Police are not protecting public safety. The laws are arbitrarily enforced which demonstrates criminalizing marijuana is unreasonable, unconstitutional violating the 4th 5th, and 14th Amendments.

The role of the judiciary is to defend fundamental rights secured by the Constitution. They can’t defend life, liberty, and property unless a claim of a concrete injury has been presented for adjudication. Being arrested for violating the marijuana laws a person has had standing and the right to ask why criminalizing marijuana is reasonable and necessary.

You do not have to be a lawyer to learn and understand what our rights are and how they are protected by the Fourth, Fifth, and Fourteenth Amendments against unreasonable government intrusion and how those individual rights are betrayed by those of the judiciary who take an oath to protect them. http://www.courts.maine.gov/index.shtml

The judiciary demeans these Amendments. Lawyers will say the 4th means it is reasonable to seize your person because marijuana is illegal. Due process of the 5th and 14th means only the prosecution of the law. You have your day in court is due process.

These amendments also requires the police laws to be reasonable to protect the right of others, a compelling state interest.

DEFENDANTS should PLEAD not guilty, go to trial, make a motion to dismiss on the grounds that you have been deprived of your fundamental rights to liberty and property without reason,without a compelling state interest, without due process of law. The use of police power in the enforcement of the marijuana laws is unreasonable and  unconstitutional. And see what the judge will do. Some where a judge will recognize some one as a person. But defendants have to bring it to attention of the court.

The courts under the color of law in my lawsuits declared the marijuana laws are a political question. Voting to change the marijuana laws, to be secure against unreasonable police power, makes pot users non persons. 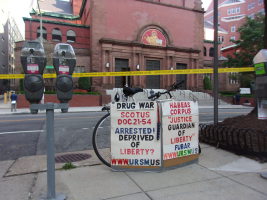 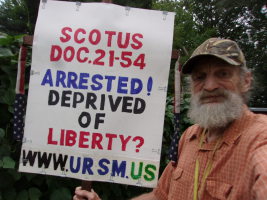 At the United Nations opening session  of the General Assembly in NYC September 24, 2013, Preaident Obama was there and a lot of police.

The lie. Police do not deprive liberty and property.

OUR RIGHTS THEIR BETRAYAL
The war on drugs is rule without law.